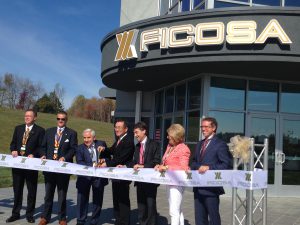 With an investment of over 50 million dollars, the new plant is equipped with the sector’s latest technology, becoming the group’s most advanced production center worldwide

The new facility, dedicated to producing rear view systems, is bringing advanced manufacturing jobs to the state of Tennessee.

Detroit –  Ficosa, a top-tier global provider devoted to the research, development, manufacturing and marketing of high-technology vision, safety, connectivity and efficiency systems for the automotive and mobility sectors, has boosted its presence in the United States by opening a new state-of-the-art manufacturing facility in Cookeville, Tennessee. With an investment of over 50 million dollars, the new plant is equipped with the sector’s latest technology, becoming the most advanced in Ficosa’s global portfolio.

The Cookeville facility, which has a total surface area of 270,000 square feet, is dedicated to producing rear view systems for automotive manufacturers such as Nissan, Ford, Volkswagen, Fiat Chrysler and General Motors. As a leader in painting and injection processes, the plant has an average production capacity of 4.5 million rear view mirrors and will add nearly 500 new and advanced manufacturing jobs in the U.S. and Tennessee. This cutting-edge production center, whose construction started in June 2015, celebrated its grand opening last Friday, October 28, with the presence of Rep. Diane Black, Cookeville City Mayor Ricky Shelton, Putnam County Executive Randy Porter, and other main authorities of the area and key automotive manufacturers.

“Today marks a great day for Ficosa and Tennessee,” said Javier Pujol, CEO of Ficosa, during the event. “This new facility is a strategic move that allows the consolidation of key operations and enables a further future growth in one of the largest automobile markets in the world, where Ficosa has been present since 1994. By opening these new premises we are not only improving the group’s efficiency and operational capacity in the region, but also reinforcing our commitment to bring more advanced manufacturing jobs to the U.S. and to help lay the foundation for a more successful manufacturing future in the state of Tennessee.”

The new plant is bringing hundreds of new jobs to Cookeville, with new job positions opening up daily, from production and project managers, technicians and engineers, to human resource specialists and assembly and warehouse workers. Those who are interested in applying for a job should send their resumes to jobscookeville@ficosa.com.

In addition, Javier Pujol explained that the Cookeville’s facility also strengthens the company’s business alliance with Panasonic – which started in 2015 – in North America (United States and Mexico). “We are boosting a plan to align the industrial strategy of Ficosa with Panasonic in the region of North America, in order to accelerate the launch of new products in the areas of connectivity, efficiency and safety. This plan allows us to support the growth of the local market and increase our capacity in R&D in mirrors, shifters and new technologies that we are developing together with Panasonic, bringing together our technological capabilities with the know-how in electronics of the Japanese company.”

In June 2016, Ficosa North America was awarded four contracts from two American OEMs to produce 8,900,000 units of rear-view mirrors over a period of five years. Three of the four orders will be produced at the new Cookeville’s plant, with an estimated economic value of 460 million dollars. Production on those contracts is scheduled to start first quarter of 2018.

Ficosa International began operating in the United States in 1995, through a technical-commercial office in Michigan. Since then, the company has expanded its capacities for the development of projects for the North American market, with the creation of a test laboratory in 1996, a CAD department in 1997, and a prototype laboratory in 1998. In 2000, Ficosa North America consolidated its engineering center with a new headquarters in Madison Heights, Michigan.

Ficosa is a global company devoted to the creation of high-technology vision, safety, efficiency and connectivity solutions for the industry, with the desire to contribute to society through our commitment to technological innovation, human values and energy efficiency. Founded in 1949 and based in Barcelona, Ficosa currently has more than 9,700 employees in 18 countries worldwide in Europe, North and South America and Asia, with consolidated sales of 1.112 billion euros in 2015. The rear view system (interior/side mirror) is Ficosa’s main business, known worldwide and recognized by top global OEMs. For more information, visit www.ficosa.com.