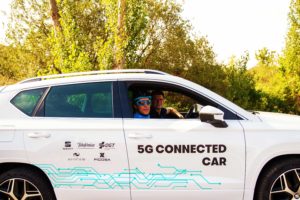 Two use cases in which drones with a camera, an intelligent platform, and the connected car are able to communicate end-to-end via the Telefónica network.

Drivers of connected vehicles are alerted to two dangerous situations on the road: the presence of a cyclist and a stationary vehicle on the road.

Today, in Becerril de la Sierra (Madrid), Telefónica, the Directorate General for Traffic (DGT) and SEAT have presented two cases in which IoT (Internet of Things) technology is used to increase road safety by helping to reduce accidents on Spanish roads.

The aim of the project is to show how an Internet of Things solution works in the early detection and warning of hazards to drivers travelling on a road with two specific cases that often cause situations of great danger:

The presentation of the pilot was arranged against the backdrop of the arrival of the 18th stage of the Vuelta (Cycling Tour of Spain) and included the presence of Vicente Muñoz, Chief IoT Officer of Telefónica; Ana Blanco Bergareche, Assitant Deputy Director for Mobility, General Directorate of Traffic (DGT); César de Marco, Head of 5G Connected Car at SEAT; and Pedro Delgado, former professional cyclist.

The Internet of Things system consists of a drone with a camera, which captures images of what is happening on the road and sends them in real time to a server that will soon be connected to the DGT 3.0 platform via Telefónica’s mobile network. The system processes the image, detects if there is a bicycle or a stationary vehicle on the road and sends an alert to the connected SEAT car.

The vehicle is connected to the network by a Telematic Control Unit (TCU), using C-V2X (Cellular Vehicle to Everything) technology through software that enables communication between the vehicle’s internal network and its surroundings (the DGT 3.0 platform, signalling and infrastructure systems, other vehicles etc.).

The result is that the connected cars travelling on that road and in the same direction in which the obstacle has been detected receive an alert that warns them of the danger they are going to encounter further on. This means that the driver can anticipate the problem and make decisions, having time to react, thus avoiding possible accidents.

To accomplish this, the DGT has relied on Telefónica as its technological partner. Telefónica has provided the project with end-to-end connectivity and has opened its network so that third parties can deploy applications on the edge of the network, enabling critical communications with immediate response (low latency) such as traffic management. Given that to establish communication with connected cars it is essential that latencies are minimal, it is necessary to deploy 5G capabilities on the current network, specifically the capacity of the Edge Computing server, a large distributed brain that hosts the content and applications very close to where the user consumes them.

At this year’s Mobile World Congress, Telefónica and SEAT presented several use cases for connected cars and assisted driving via 5G in a real environment, in which sensors installed in various infrastructures of the city warned the connected cars of the presence of pedestrians, cyclists and stationary vehicles on the roads.

The DGT 3.0 platform keeps road users connected by informing them of real-time traffic status, diversions, reversible lanes, application of measures for pollution protocols, traffic restrictions, road works being carried out and any type of incident that may affect traffic circulation. Similarly, it can also send them alerts about the proximity of cyclists, the forecast of roadblocks or traffic jams as well as the risk of fog. All this information is of vital importance when it comes to improving road safety, particularly on secondary roads.

All this data will be exchanged between the drivers and the DGT intelligent platform anonymously with all the assurances in place to maintain users’ digital security.

Telefónica’s has a close relationship with the world of cycling, as demonstrated by the fact that it is the main sponsor of the Movistar Team and its commitment to cyclists’ safety is also reflected in actions such as the #RodamosJuntos initiative, which, with the help of the DGT; the National Sports Council (CSD in its Spanish initials); the Spanish TV network, RTVE; the Vuelta a España Cycling Tour and the Royal Spanish Cycling Federation (RFEC in its Spanish initials), launched an awareness campaign two years ago, reminding people of the importance of mutual respect among cyclists and drivers on the road.

The project also involved SEAT, an industry leader for its connected cars, which has provided vehicles equipped with the latest connectivity technology to offer drivers a better and safer driving experience as part of its commitment to road safety; Ficosa, which developed the TCU unit and software that allows the transmission of information from a car to any external entity that may be affected and vice versa; and Aeorum, which has designed and developed drones with cameras and intelligence to identify obstacles that may appear on the road.

This action is part of the DGT’s commitment to road safety, placing special emphasis on cyclists, one of the most vulnerable groups of users, as demonstrated by the fact that a total of 36 cyclists lost their lives on Spanish roads in 2018. The aim is to be able to eradicate fatal and serious accidents, as well as minimise emissions on the roads. To achieve this technology is one of our great allies.