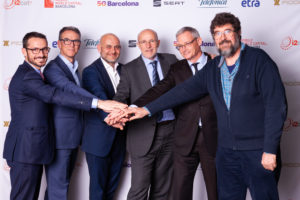 The agreement will allow for the incorporation of SEAT, Ficosa and ETRA in 5G Barcelona, an initiative promoted by MWCapital, i2CAT and others that also involves Telefónica

Application of 5G technology to the project will facilitate testing of the connection among automobiles, urban infrastructure and other vehicles

Mobile World Capital Barcelona, SEAT, Telefónica, Ficosa, ETRA and i2CAT have signed a collaboration agreement to perform a pilot project for connected cars. The project lies within the scope of the 5G Barcelona consortium, which is an initiative intended to consolidate the city of Barcelona as Europe’s benchmark 5G hub. It also involves the collaboration of other members of 5G Barcelona such as UPC and CTTC.

This pilot project, which is jointly headed by SEAT and Telefónica, represents the first step towards totally cooperative autonomous driving. The features of 5G technology, such as low latency and edge computing (a technology that simplifies IoT device traffic and permits real-time local data analysis), will facilitate communication among the automobile, the infrastructure and other travelling vehicles.

The pilot project will cover both safety while driving and aspects related to “infotainment” through the downloading of high-definition entertainment contents.