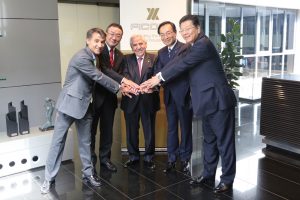 Panasonic Corporation (Head office: Kadoma City, Osaka, President: Kazuhiro Tsuga; hereinafter, Panasonic) announced today that it has completed its previously announced acquisition of additional shares in Ficosa International, S.A. (Head office: Barcelona City, Spain, CEO: Javier Pujol; hereinafter, Ficosa), which is a global tier 1 supplier of automotive parts and systems, after the satisfaction of all conditions to the closing of the transaction as of July 4.

Panasonic has acquired an additional 20% of Ficosa’s issued shares held by Ficosa Inversión S.L., which manages the assets of the Pujol family, the founders of the Barcelona-based auto-parts supplier. Combined with the shares Panasonic already holds, Panasonic now owns 69% of the issued shares of Ficosa, making it a consolidated subsidiary. The Pujol Family will maintain a 31% stake in the company as Industrial Partner. Ficosa will continue to be managed by Mr. Javier Pujol as CEO.

With the deal closed, Ficosa will be accounted as a consolidated subsidiary of Panasonic retroactive to April 2017 for accounting purpose.

Panasonic is aiming to reach sales of two trillion yen in its automotive business in fiscal 2019 ending March 2019, and is proceeding with initiatives targeting growth in the areas of ‘Comfort’, ‘Safety’ and ‘Environment’. Under such initiatives, Panasonic and Ficosa are combining their respective technologies to jointly develop products such as electronic mirror systems, next-generation cockpit systems and Advanced Driver Assistance Systems (ADAS), which will facilitate business expansion in fields where future growth is anticipated.  With this transaction, Panasonic positions Ficosa as one of Panasonic’s business divisions and will accelerate the commercialization of products jointly developed by both companies, while also facilitating greater coordination in corporate governance.